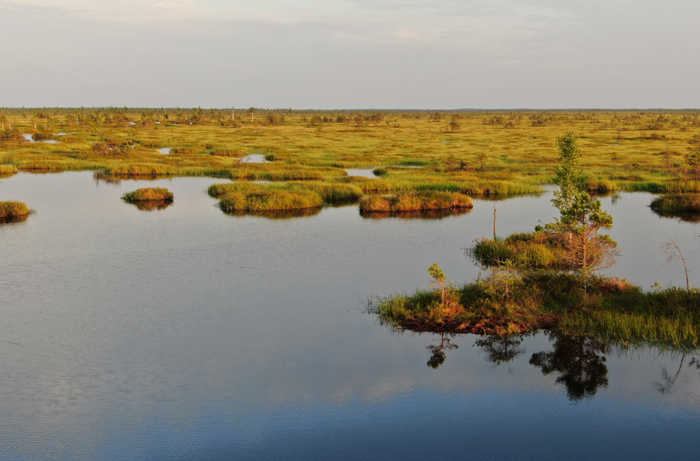 14.10.2021
Photos of the Jeĺnia Swamp appear more and more often in Instagram and other social networks, as increasingly more Belarusians are discovering the destination, while one cannot keep from sharing the beauty of its landscapes. Still, Jeĺnia has more than the landscape splendour to sweep you away!

The Jeĺnia tourist infrastructure has been actively developing: the eco-path has been renovated and extended, a number of guide training and certification events have been held, and two 10-meter observation towers will be installed in near future. All that is done under the project “Together for Community and Nature: Miory District”, which is implemented by the Miory District Executive Committee, APB-Birdlife NGO and Latvian Rural Forum with financial support from the European Union.

APB has collected for you 7 interesting facts about the largest raised swamp in Belarus. Get inspired for an unforgettable tour!

1. The swamp occupies an area almost equal to that of the city of Minsk. It resembles a hill, as it rises 7 meters in midpoint over its edges. Several rivers flow out of Jeĺnia, and no rivers flow into the swamp.

2. The area of the Jeĺnia Swamp covers 118 lakes with the water that is so soft and clean that one can drink it. The pine-covered islets scattered among the numerous small lakes are the Jeĺnia’s landmarks, the photos of which have been seen by many. However, it is much more fun to see them with one’s own eyes.

3. Jeĺnia is known for its cranes that nest there, flocking in thousands during their autumn migration to feed on the surrounding fields; they also stay in Jeĺnia overnight. No wonder that the swamp was granted the international status of an important bird area. The swamp is home to such key species as the grey crane, as well as the largest waders in the country that are tall enough to reach up to a man's knee: the black-tailed godwit and the common curlew.

4. Jeĺnia also enjoys the status of a key plant area. It is home to 12 rare plant species including the dwarf birch and the cloudberry. Probably, everybody knows that Jeĺnia is a record-breaking swamp in Belarus in terms of the amount of cranberries that grow there. However, few know that in addition to the common bog cranberry it is home to the small cranberry, which is listed in the Red Book of Belarus. The small cranberry grows only in the oldest swamps of Belarus.

5. Many people would love to see the sundews (a predatory plant), and they are surprised by its small size, when they come to Jeĺnia. Two sundew species grow in Jeĺnia: the round leaf sundew, which is also called zaharduška in Belarusian, or the God’s dew; and the long leaf, or the English sundew. The association of the word sundew with dew is far from accidental, as the sundews excrete droplets of sticky “dew” to catch insects.

6. Jeĺnia’s peat layer is from 7 to 9 metres deep! Given that the layer grows by only 1 mm a year, the swamp must be 9,000 years old. The key peat sources in Jeĺnia are the sphagnum mosses. They are rootless – if one pulls a plant out of water and puts it back, it will keep growing. The lower part of the plant dies away and turns into peat.

7. In Jeĺnia, there is a handy eco-path made of wooden planks, which offers some awesome views; still, one can put a pair of swamp shoes on to go out for a stroll around the swamp. This service is provided by Jeĺnia Environmental Agency. Nowhere in Belarus there are as many local guides offering unique tours varying from quests and quizzes to yoga and meditation, berry gathering, “swamp spa” and fishing.

- Jeĺnia never fails to take by surprise even those who have heard about it a million times but find themselves there for the first time, - says Siarhiej Rezaŭ, ASB Tourism Development Specialist. – Tourists and participants of our volunteer swamp summer camps share their strongest impressions of Jeĺnia, and we made a list of their top feedback. Here, many people appreciated for the first time how intoxicating the scent of rosemary may be, how the sphagnum springs back underfoot, they saw where and how the cranberry grows, what indescribable colours can the heather have, what a tiny thing the predatory plant of sundew actually is, how starry are the skies over Jeĺnia. I have not yet come across a person who would fail to admire this swamp.

Keep in mind that you cannot start a fire and smoke cigarettes in Jeĺnia, as peat is easily ignitable. Do not drive into the swamp by car, do not leave trash and do not collect bouquets of swamp plants. We recommend that you fetch a camera and a pair of binoculars, put on something comfy and waterproof, grab a snack and bring your friends with you. If you care about nature, make sure to bring a bag to collect trash after the less caring fellow citizens.

Is your backpack ready? Go for it, then, and be carried away by Jeĺnia!