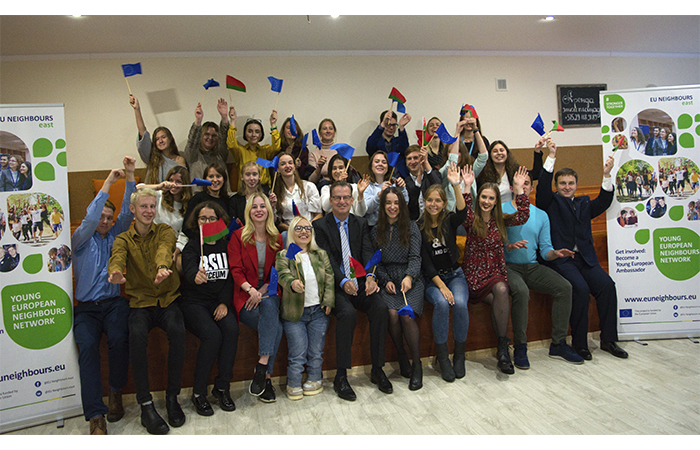 23.09.2019
On 20 September, 30 newly selected Young European Ambassadors (YEAs) from Belarus met for an induction day in the country’s capital of Minsk.

The YEAs were welcomed by the Head of the EU Delegation to Belarus, Ambassador Dirk Schuebel. During his speech, Ambassador Schuebel offered his advice to the Young European Ambassadors:

“Try to develop yourself and different fields, learn languages as you will need them. Try to become an expert in demanded fields such as IT, environmental science and others, but the most important thing – stay open minded and connect to people from other countries.”

On 21 September, the YEAs participated in a so-called Hackathon to develop a social media component for their individual projects. They also discussed plans for the upcoming year and participate in a social media training seminar.

The Young European Ambassadors initiative aims to foster cooperation and sustainable links between young people and youth organisations from the EU and its Eastern partner countries: Armenia, Azerbaijan, Belarus, Georgia, the Republic of Moldova and Ukraine.

The YEAs are the driving force of the “Young European Neighbours” network, an online platform facilitating the mutual exchange of ideas and information on the EU, as well as the engagement of young people in informative activities.

The network is focused on dialogue-driven activities that contribute to a greater awareness and improved perception of the EU, and the enhanced assessment of its relations with the Eastern Neighbourhood.