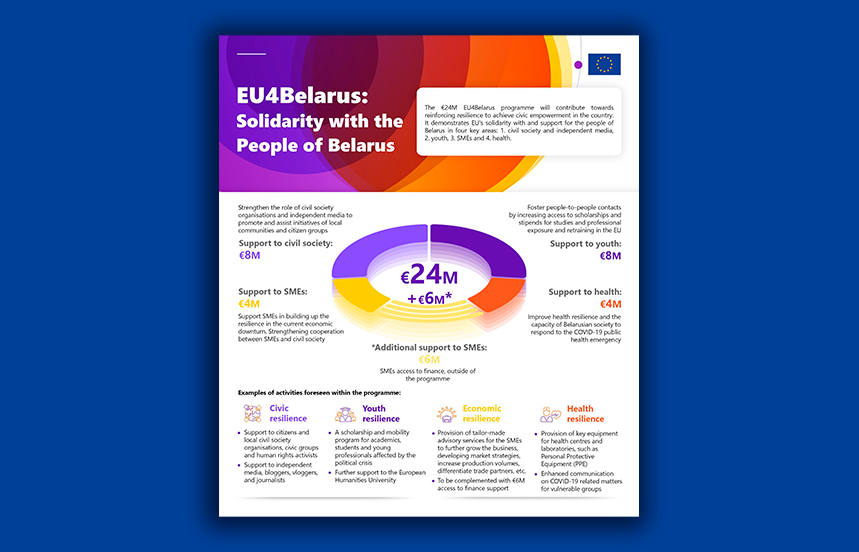 11.12.2020
Today, the European Commission adopted a €24 million assistance package, which will benefit directly the Belarusian people, in particular civil society, youth and small and medium-sized enterprises, and improve health capacities. 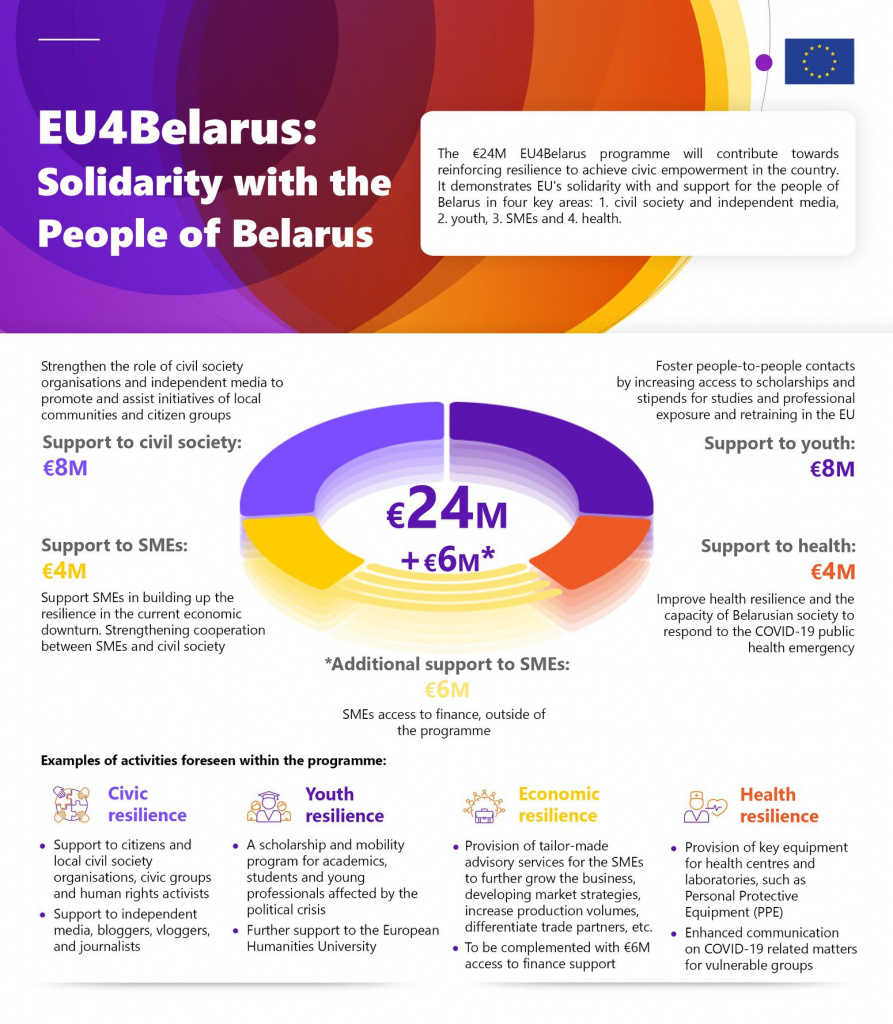 Commissioner for Neighbourhood and Enlargement, Olivér Várhelyi, commented: “The immense courage of the Belarusian people who peacefully mobilised to defend their democratic and human rights is an inspiration for us all. With this newly adopted support package, the EU is making it clear that it stands on the side of the people of Belarus and delivers on its commitment to step up support to civil society. We also stand ready to support a democratic and peaceful transition in the country with all tools and instruments at our disposal.”

The new assistance programme “EU4Belarus: solidarity with the people of Belarus” will focus on four key areas:

1) Support to civil society and independent media, in particular to local communities and citizen groups’ initiatives;
2) Support to youth, including through a scholarship programme for students and young professionals affected by the political crisis;
3) Advisory support to Small and Medium-sized Enterprises (SMEs) to build up resilience in the current economic downturn
4) Improvement of health resilience by strengthening the capacity of Belarusian society to respond to the still on-going COVID-19 pandemic.

This programme is part of the €53 million support package announced in August by the European Commission President, Ursula von der Leyen, which also includes €3.7 million EU emergency support immediately mobilised for the victims of oppression and independent media after the Belarus presidential elections held in August. Further support to facilitate SME access to finance, worth €6 million, is under preparation.

Following the 9 August presidential elections, which were neither free nor fair, and the brutal response by the authorities, the EU has been supporting the legitimate democratic rights of the Belarusian people. The Council conclusions on Belarus on 12 October condemned the violence employed by the Belarusian authorities against peaceful protesters and called for a democratic solution to the crisis through an inclusive national dialogue with the broader society. In this context, the Council announced a review of EU’s relations with Belarus, including a scaling down of bilateral cooperation with the Belarusian authorities at central level and an increase of EU’s support for the Belarusian people and civil society. The package adopted today is part of the EU’s commitment to step up and redirect support to civil society in Belarus.

In addition to the package adopted today, the European Commission is advancing on the preparation of a comprehensive plan of economic support for a democratic Belarus, in line with its commitment to support a peaceful democratic transition in the country. Should such a transition take place, and upon the request by the Belarusian government, the EU stands ready to use a variety of instruments in line with the Eastern Partnership policy to accompany the democratic transition.