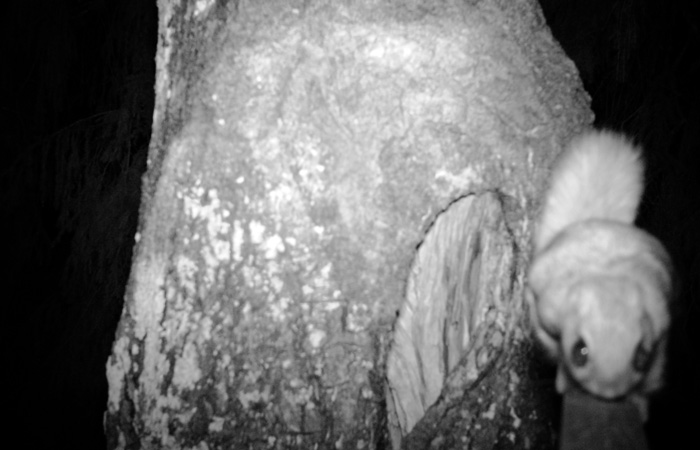 31.01.2020
In the middle of December 2019 APB-BirdLife Belarus arranged an expedition to Haradok forestry to explain local forest-guards about life peculiarities of a rare rodent species – flying squirrel Pteromys Volans – and to install together with foresters camera traps in the most probable habitats of this small animal.

Belarusian scientists and conservationists had not seen the squirrel since 1996, until APB activists Denis Kitel and Andrei Abramchuk found it again in 2017. Using a new approach they discovered several sites with a flying squirrel and even managed to take a photograph of this nocturnal animal.

APB set a challenge to find as many flying squirrel habitats as possible and put them under protection. In spring 2019 and later several expeditions took place in Viciebsk, Haradok and Šumilina districts as part of the environmental initiative “Hamster, spotted souslik and flying squirrel: save the super-rodents!” in frame of a project called “Civic engagement in environmental monitoring and improving environmental management at the local level” which is funded by European Union and implemented by UNDP in partnership with The Ministry of Natural Resources and Environmental Protection of the Republic of Belarus.

Flying squirrels are cautious nocturnal animals, so it is quite difficult to find and especially photograph them. Using camera traps specialists have more opportunity to find their new habitats.

The camera traps are installed near hollows in potential squirrel habitats. The cameras are motion-activated and take images or short videos during both day and night. Thanks to them APB managed to obtain the first video of a flying squirrel in Belarus. The camera traps were installed by Denis Kitel, Anastasia Kuzmiankova and Dmitry Shamovich.

The video shows flying squirrels’ moving along a tree trunk and checking hollows. You can also see how a squirrel carries food - aspen catkins, how this cute animal flies away pushing off the tree trunk. One of the videos even shows two flying squirrels together.

New sighting of a flying squirrel was received by APB during wildlife lectures for forest-guards. One of the Suraž forestry workers – Aliaksandr Rubankoŭ – even managed to take a picture of this cautious animal in a very remote location which had never been examined by specialists before.

Andrei Abramchuk, APB expert: “For now we mainly worked in two forestries – Haradok and Suraž. Since the launch of the initiative we have found more than 80 habitats of the flying squirrel, and for majority of these sites we prepared protection documentation. It is encouraging that the forestries are willing to cooperate with us on our proposals regarding squirrel protection. Only in Suraž forestry we prepared habitat protection passports for a territory larger than 2,000 hectares. We are very impressed by working with this forestry and particularly with the forest division manager Maryna Kryŭko. She is a well organized person: she immediately made a note of all sites with the flying squirrels and verified if there were any planned felling activities there”.

Felling of old aspen and spruce forests is the main threat for the flying squirrels. APB scheduled new expeditions to potential squirrel habitats in upcoming spring. We must undertake urgent actions for conservation of that small population of this Red Data List animal in our country.

If you are aware about flying squirrel habitats, inform APB specialists by e-mail: levy@ptushki.org. It is very important to find these areas and protect them to avoid trees felling.

The environmental initiative “Hamster, spotted souslik and flying squirrel: save the super-rodents!” is implemented by APB-BirdLife Belarus in partnership with Haradok forestry, non-governmental public association of ecology and local history “Nerush” and SPC NAS of Belarus for Bioresources.