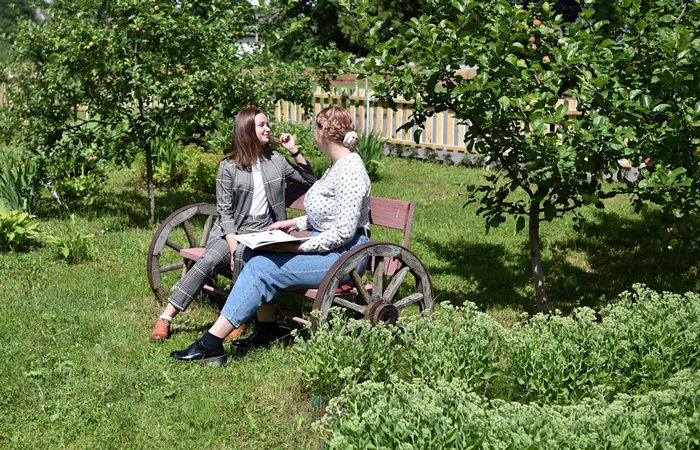 17.07.2020
“Before, there was not a single bird in the school area, and it is so beautiful now”, - Tamara Sushkova, the Principal of Talačyn School No. 2, shows the green school yard, which began to transform in 2016. They have laid out an orchard, planted a lot of flowers, erected several greenhouses and set up a vegetable garden, where they grow various vegetables.

It all begun owing to a local initiative supported by the EU/UNDP project on Support to Local Development in the Republic of Belarus.

Anna Zburzhinskaya will leave the school next year, and she has witnessed all the changes: “It used to be an area that was perceived as an unfinished hockey rink – there were no trees there”. 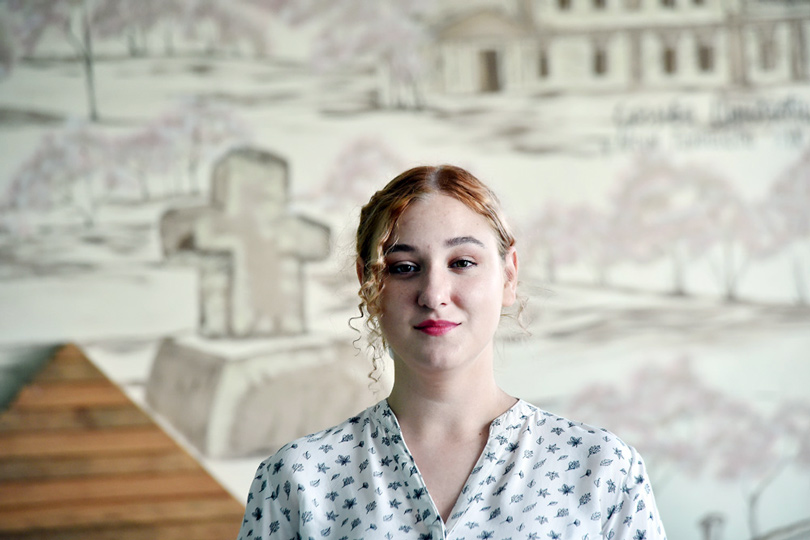 It has all changed for the better, says the girl. She does like gardening, but she plans to leave for Minsk and enrol at university, possibly, the Linguistic University. The girl studies maths and English in-depth: “The other profile in the 11th grade is agrarian. There, they delve into chemistry and biology, attend extracurricular chemistry and biology classes in a combination with agricultural work”.

Anna takes part in many school undertakings - in 2018, she was actively involved in the Vitamin Garden Bed. Lettuce Garden project, which was awarded the first-place diploma on the national level.

“Lettuce was planted in a quilt pattern. It was a vitamin art object. My classmates and I did it all and then we presented the harvest to the Social Services Centre. Of course, we do not plant lettuce quilts at home, but we all have private houses; therefore, we have our orchards and kitchen gardens”, - recounted the girl. 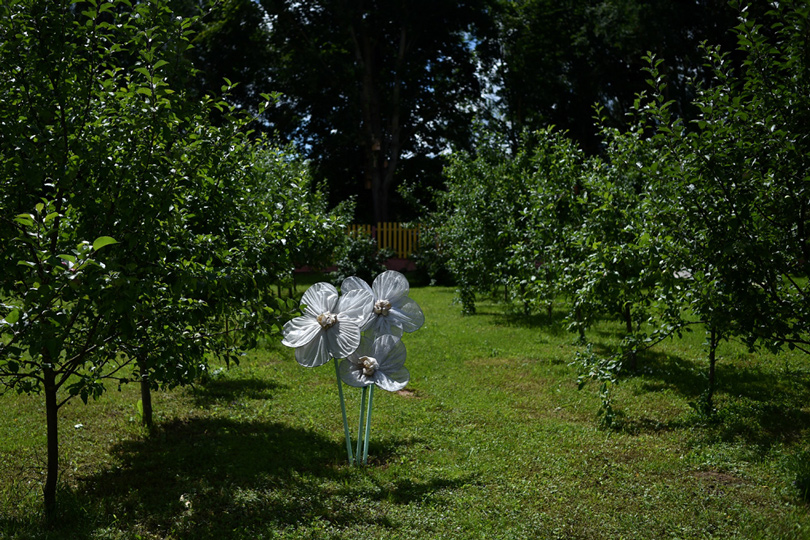 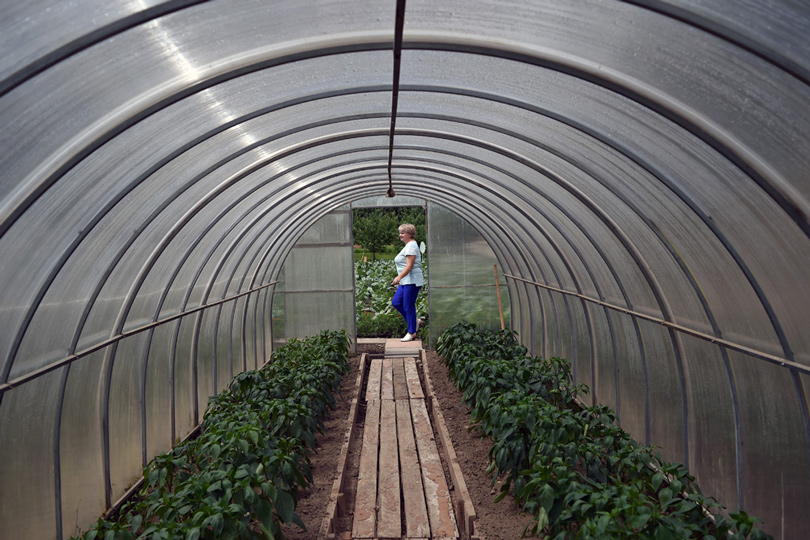 As mentioned by Tamara Sushkova, first, there was a local initiative on setting up a training agri-eco estate for introducing the present-day schoolchildren to agricultural-profile professions. The initiative was awarded a grant of US Dollars 17,045 under the EU/UNDP project on Support to Local Development in the Republic of Belarus. 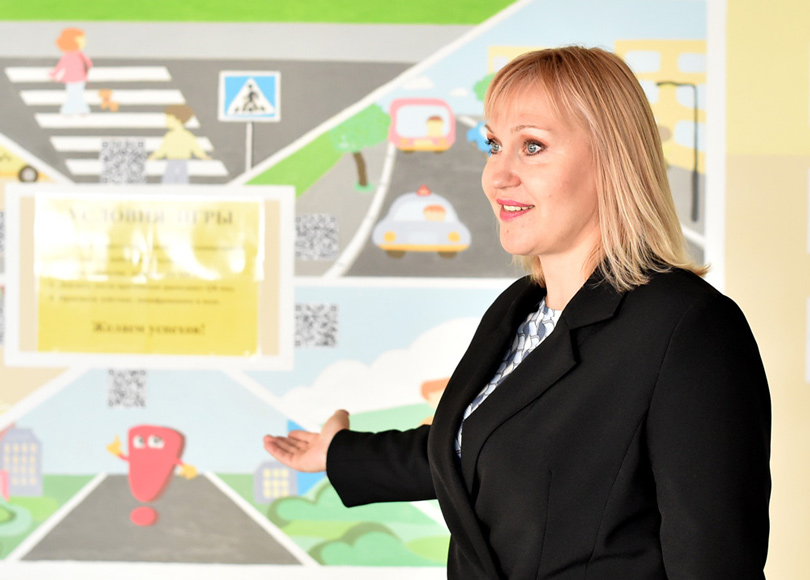 “We procured a mini-tractor, a plough and a ridger, a mower and a trailer, garden carts and numerous utensils for farming. We created four zones: a school vegetable and flower garden with unusually-shaped seedbeds and ornamental designs; a garden; a recreation zone; and flower beds. We also procured thirty thujas and a hundred dwarf apple trees under the project; almost all of them have taken root”, — recounted Tamara Sushkova. 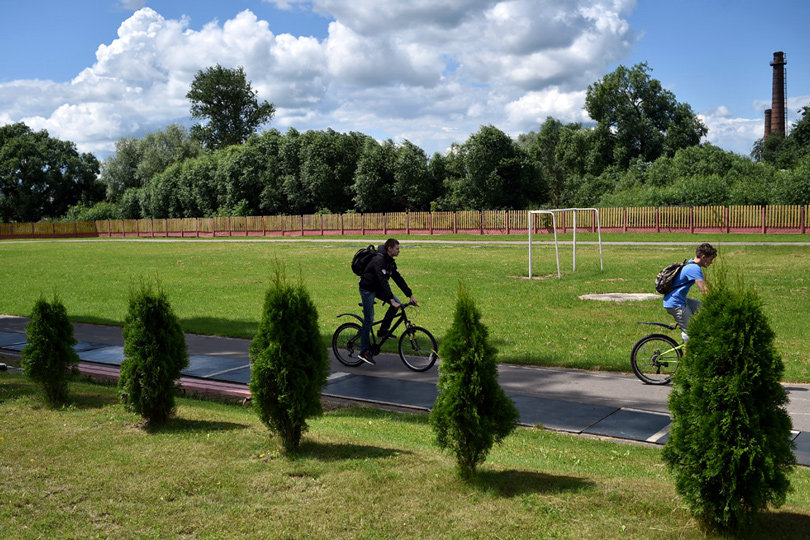 Two years ago, the apple trees bore fruit for the first time, and quite abundantly. The harvest is used for giving presents: they give a basket of apples to first-grade schoolchildren on the 1st of September.
After obtaining a hygiene certificate, the apples are also supplied for children’s catering in the school cafeteria, as well as all vegetables from the garden.

“It allows cutting the school catering costs – says the Principal. – Apart from our intention to cultivate the love for the land and farming, our project was also initially designed to support the children’s catering. A school lunch for the children costs approximately 1 ruble and 40 kopeks. Owing to the project, we have four ten-metre greenhouses, we are selling surplus produce. We gather two harvests: we plant radish in spring, then we invest the money generated from its sale into seed materials. In autumn, we sell bell peppers”. 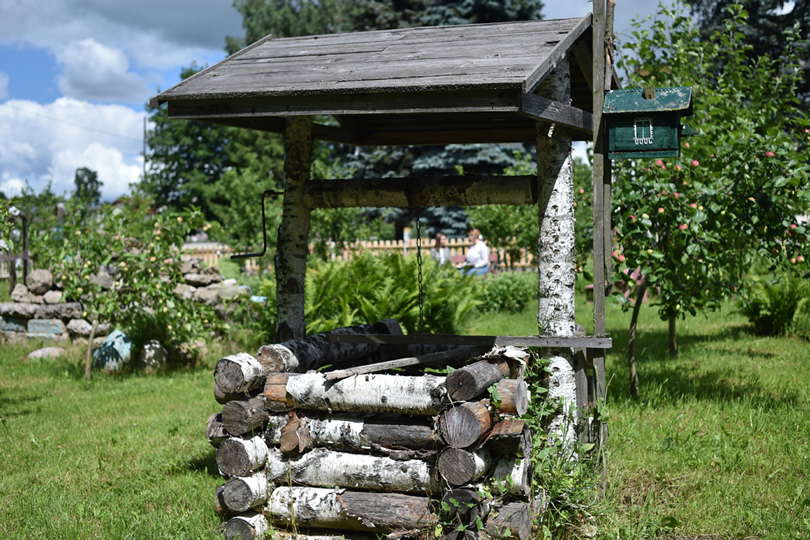 The test of renovation and coronavirus

The school garden was put to test, as they had to relocate the greenhouses and the recreational zone, when the municipal heating mains were renewed.

Alexandra Shchavruk, who has passed to the 10th grade with merit, recounts that she took part in the development of the recreational zone plan, in particular, the Four Seasons garden, which is not around yet because of the same heat main repairs. 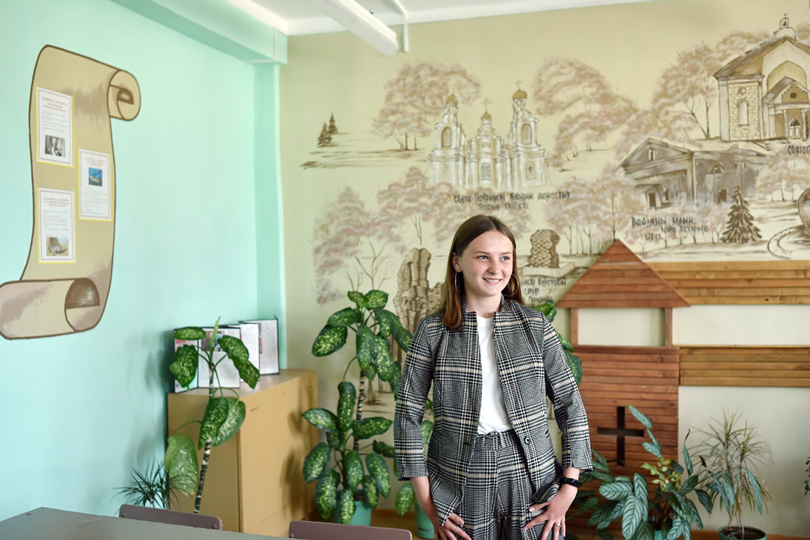 The girl also recalls with delight the Belarusian Versailles project, in which she was actively involved: “We planted flowers and took care of them”.

Now, the students are minimally engaged in the work because of coronavirus. The vegetable garden is mainly taken care of by the teachers; even the Principal pulls weeds at the vegetable patches.

“Sometimes people ask me, - recounts Tamara Sushkova, - say, isn’t there anyone else to pull weeds? I do not see anything shameful about it, I like doing it. This year, we have a modest garden, it was stupendous last year. We used to hold a contest for the best vegetable patch, you see, it is an intensive, an award at the school assembly. Now, we simply maintain the plantations and wait for the time, when we will be able to show what we can do after the coronavirus is over”. 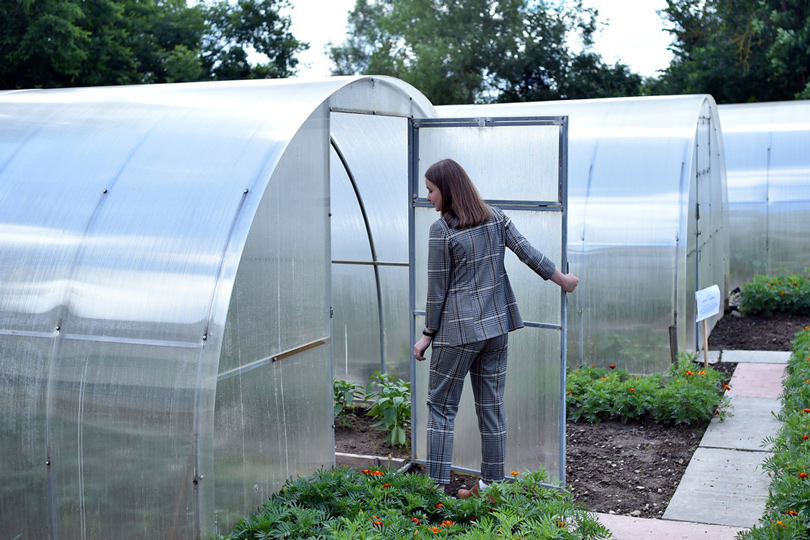 Tamara Sushkova says that there has not been a single event in her school in which she has not participated. She used to go to this school herself, and when she was 19, she came back to the school as a junior class teacher after graduation from Orša Teacher Training College. Then, she studied at Viciebsk State University named after Mašeraŭ.

She says that there are many school graduates among the present-day teachers: 28 out of 60. As regards the orchard project, Tamara Sushkova launched it as the Deputy Principal:

“I keep saying: if you are a good teacher, at least one student out of a class will want to follow in your footsteps. And the fact that professionals come back to the school after their studies, means to me that their teachers had shown to them something that they wanted to repeat. Our children demonstrate high academic performance, we have a great team of teachers who maintain a high level of professional skills. I would like to raise the competitive edge of our school, which is the best in the town. To this end, it is very important to make the school aesthetically appealing”.

“The project brought together schoolchildren, teachers and parents around the school”

The project sustainability is ensured by the goal-oriented and systematic work, says the Principal. Once a month, they hold the All to the Garden labour activity for 5-11th grade students. Small children help grow seedlings and do some minor work.

They also worked together when the project was only commencing: “We picked up rocks, old broken asphalt; we delivered 150 large trucks of topsoil there, we expanded the orchard and garden area to 25 acres; we reclaimed a wasteland, in fact. Everyone worked there: senior-school boys, parents, teachers”.

Tamara Sushkova shows a photo on her computer monitor: here is the tractor, here is the landscaping work, there are the orchard-related projects. “There was, - she says, - a real lot of work, but the result is great”. 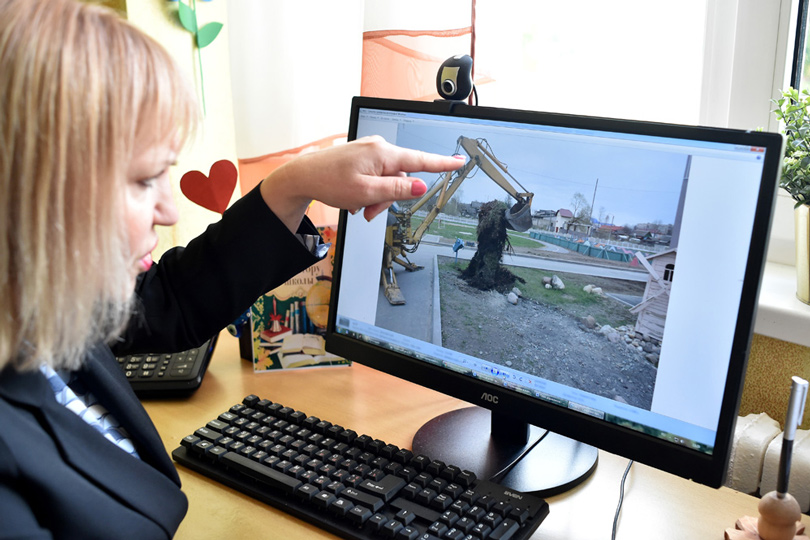 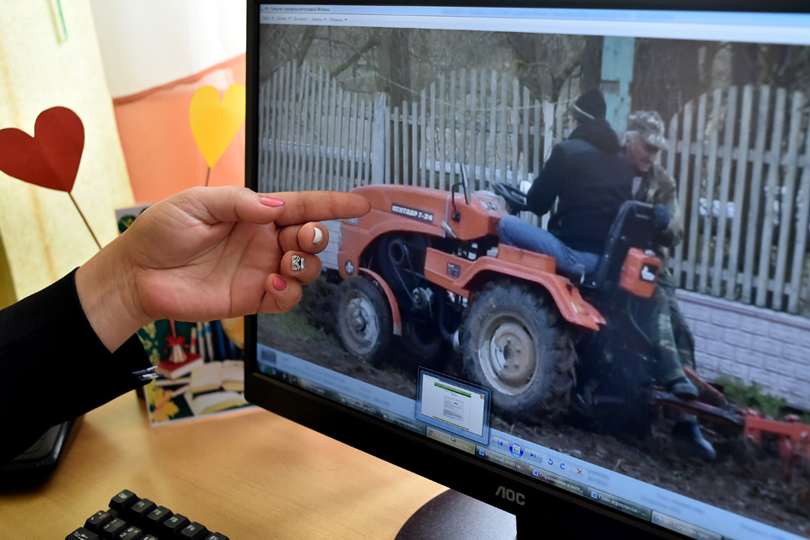 It is more than the harvest alone; the matter is that the project brought together the schoolchildren, teachers and parents around the school and gave a creative impulse to children, too, - mentioned the Principal. Every year, the school has an orchard-related project – this year, it should have been the Apothecary Garden, but it had to be delayed due to the coronavirus epidemic. 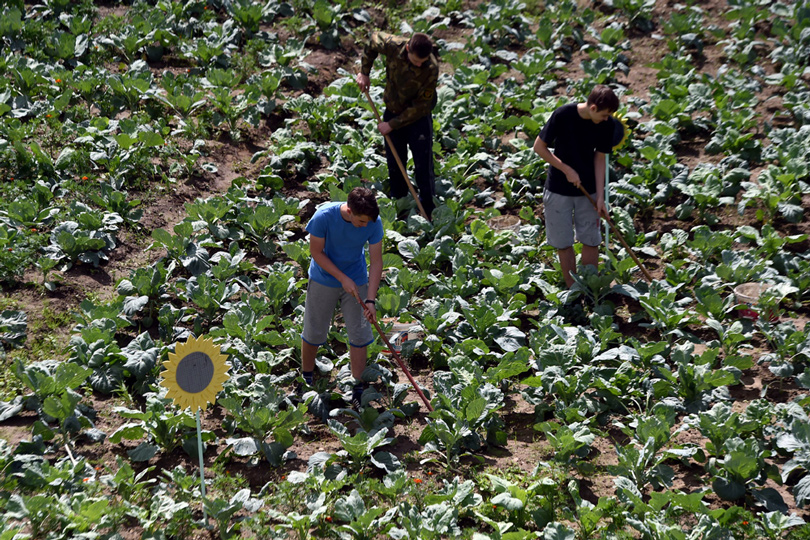 “We have not had a single bird in the school area before, and it is so beautiful now, - says Tamara Sushkova, – Apart from the apple trees, we have planted other trees as well, so it is one of the eco-friendly locations in the town. Every spring, we wonder if birds are going to settle in the starling and tit nesting boxes. They do. In winter, we make a ‘bird cafeteria’, which makes the birds come to us, too. Pensioners and parents with children spend their afternoons in the school yard. We even have a playground for them, the project works for all town residents”. 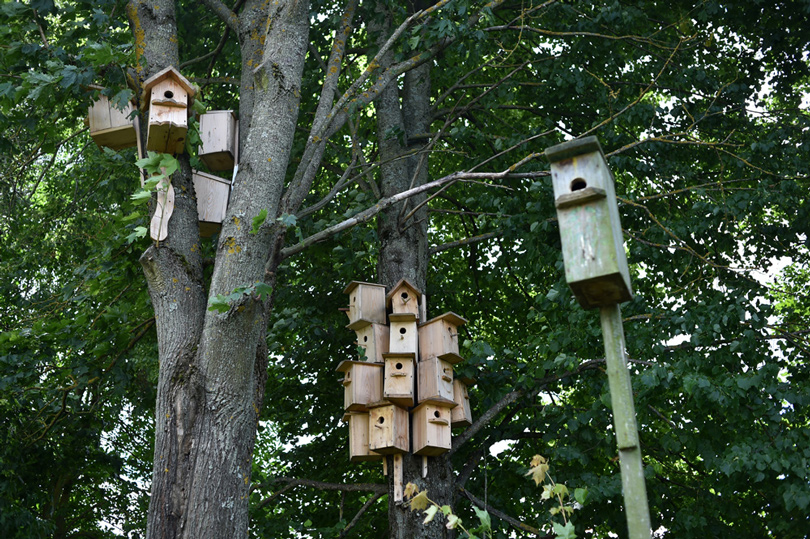 Original source: Naviny.by. The article was prepared in cooperation with EU Neighbours East.