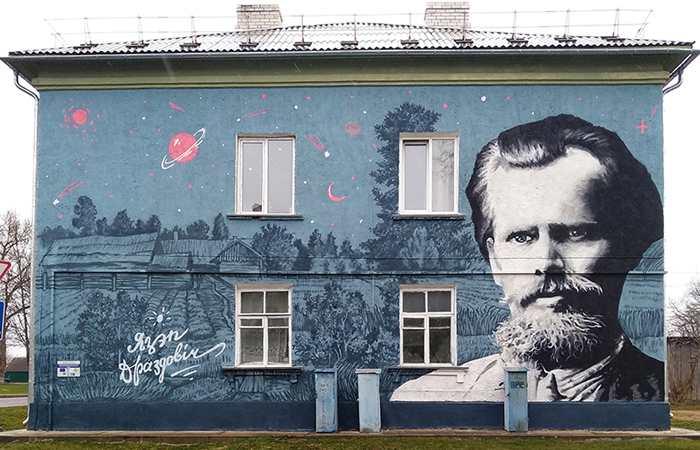 23.04.2021
The smallest town of Belarus now has possibly the largest portrait of the famous artist Jazep Drazdovič (1888-1954) in the country. Come to Dzisna and find the two-storey building at 27 Jubiliejnaja street.

The graffiti was created under the project “Together for Community and Nature: Strengthening of Development Process in Miory District by Partnership of Authorities and Civil Society”, which is implemented by the Miory District Executive Committee in partnership with APB-Birdlife and Latvian Rural Forum; the project is financed by the European Union

The graffiti was drafted by the street artist Aleś Kontra, and the wall was painted by his colleague Yevgeny Sosiura.

- In order to develop the graffiti concept, I began to look for materials on the history of the Dzisna land. – said Ales. – There were many ideas, but the concept of immortalizing Drazdovič, who began his studies in Dzisna Gymnasium and embarked on the artist’s path here by making sketches of the local landscapes, appeared to be the best. Jazep Drazdovič travelled a lot, but he often returned to this place. Here, he both drew graphic landscapes from nature and recorded the local people’s lexicon for dictionaries, the folklore; he compiled The Dzisna Land Collection of Songs. I added to the sketch several celestial objects from the basic astronomy – the science that made an impact on Drazdovič. The landscapes on the sketch are Drazdovič’s – his home village of Puńki, where he was born and spent his childhood.

The local residents liked the idea and the mural itself very much. Many people approached Yevgeny thanked him in the process of painting.

- Since I put my signature at the very end, the passers-by often asked me, who I was drawing, - recounted Yevgeny Sosiura. – Most people did not know who Drazdovič was. However, several persons recognized him. One granny even said that she had seen him when she was a little girl, when he was painting some canvases, and gave a detailed description of his appearance.

Yevgeny Baran, Chairperson of the Dzisna Town Executive Committee, emphasized that the creation of the mural was a signature event for Dzisna.

- This is the first such graffiti in our town, and we are certain that it will attract tourists, - he says. – It is symbolic, and it is no coincidence that the building of the former school, where Jazep Drazdovič studied for four years, is located next to the graffiti site.

It is not the only building in Miory District that was created under the project. Jazep Drazdovič is well known for his painted carpets; and, last year, Aleś Kontra painted a stylized carpet of the kind, showing 10 landmarks of the district. Also, he painted the Miory brand pattern on a shop in the village of Pierabroddzie; and a nature/daily life theme in the double weaving style – on the former sawmill building.

You are welcome to Dzisna to travel around Miory land and share your photos against the murals in social networks!