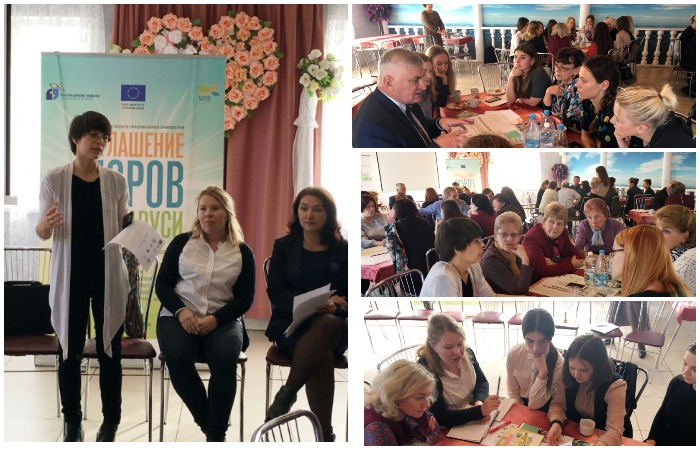 28.10.2019
A local forum on the district development prospects was held on 24 October 2019 in the town of Zeĺva, Hrodna Region. The local residents had an opportunity to express their opinions and hold a discussion with experts concerning top priority activities to be included into the sustainable development and climate plans for their area. The document is developed as part of the Zeĺva District contribution to the Covenant of Mayors for Climate and Energy.

The local forum was organised within the framework of the European Union-financed Project “Strengthening the Covenant of Mayors Movement in Belarus”.

The forum brought together Zeĺva residents of various ages and trades. The participants included representatives of the district executive committee, healthcare and social services, as well as local activists ranging from schoolchildren to senior citizens.

The group discussion revolved around several topics: green technologies, organic farming, healthy food, energy saving and climate change, Zeĺva land cultural traditions and establishment of recreational areas. During the event, the participants had an opportunity to take part in discussions on several topics and put forward their proposals. Moderators of each group made presentations of the discussions outcomes.

Most proposals of the forum participants were about landscaping the reservoir, which has a high potential for tourism development, particularly in the climate-warming context. There, they suggested installing energy saving lights and building rest, souvenir sales and caught fish cooking points, as well as setting up some buoyant treatment plants on the reservoir surface to improve the water quality.

One of the issues of the highest concern to the residents was the establishment of a cycling infrastructure in the town, as the lack of bike paths and high kerbs complicate the use of bicycles, while the town has no public transportation.

Several proposals concerned the establishment of green areas in the town, with sun and rain shelters, and installation of drinking fountains and benches along the longest streets. During the discussions, the proposed locations of such facilities were marked on the Zeĺva map.

In the energy efficiency and renewable energy use spheres, they suggested implementing a number of pivot projects on manufacturing bulrush-based wall insulating materials and on building eco-houses with local materials. The residents were also concerned about the inefficient use of the wind turbines installed in the district and the large amounts of dead trees in the surrounding forests, which are used neither by the forest authority nor by the residents, and serve as pest breeding grounds.

During the event, the discussions among local residents were moderated by Natalia Andreyenko and Vladimir Ushkevich, experts of Ecopartnership International NGO; by Polina Varvadenian and Vera Sysoyeva, experts of the Green Cities Project of UNDP, GEF and the Ministry of Natural Resources and Environmental Protection; as well as by local specialists.

The discussions at the local forum resulted both in proposals for the sustainable/energy development and climate action plan, and in the formation of several advocacy teams to explore the identified activity areas.