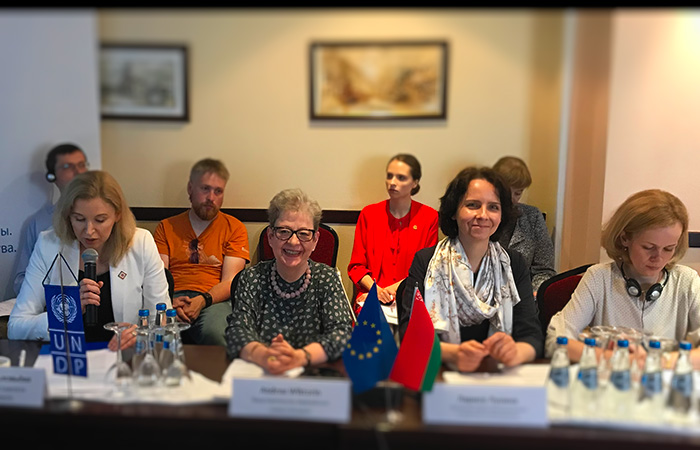 24.05.2019
With overall funding of EUR 1.1 million for Belarus over the period of 2019-2022, the project will assist the Government of the Republic of Belarus to implement its greenhouse gas (GHG) emission reduction commitments and climate resilient development under the Paris Agreement.

Given the direct and existential threat of the climate change, the European Union launched in 2019 a new regional initiative called EU4Climate, aiming to support the six Eastern Partnership countries (Armenia, Azerbaijan, Belarus, Georgia, Republic of Moldova, and Ukraine) to develop and implement climate-related policies based on the countries’ commitments under the Paris Agreement on Climate Change, the Association and Partnership Agreements with the EU, the Eastern Partnership policy initiative "20 Deliverables for 2020” (in particular the climate-related Deliverables 15 (“Enhance energy efficiency and the use of renewable energy; reduce Greenhouse Gas emissions”) and 16 (“Support the environment and adaptation to climate change”)) and the UN 2030 Agenda for Sustainable Development (in particular SDG 13 (“Climate Action”)). The project is funded by the European Union and implemented by the United Nations Development Programme. The National Inception Workshop offered an opportunity for government officials and the representatives of various stakeholder groups to discuss priorities and next steps for “EU4Climate” implementation in Belarus until 2022. The project will support the development and implementation of climate-related policies in the Republic of Belarus.

“As the largest implementer of climate action in the UN System, UNDP works with countries to turn their climate goals into action. Based upon the previous successful experience and lessons from the EU-funded ClimaEast project, UNDP will help identify the climate change mitigation and adaptation approaches to better equip partners, cut greenhouse-gas emissions and mitigate climate change effects within EU4Climate project implementation in Belarus,” said Mr. Armen Grigoryan, Team Leader for Climate and Disaster Resilience at UNDP Istanbul Regional Hub.

“The EU is a front-runner in environment and climate change adaptation and mitigation areas with the Eastern Partnership countries playing an important role in our shared efforts to have a greener development. This new programme EU4Climate will support Belarus efforts in the monitoring and implementation of the reduction of CO2 emissions and promoting climate change adaptation and mitigation. It aims to limit climate change impacts on citizens' lives and make them more resilient to it,” said Ms. Andrea Wiktorin, Head of the European Union Delegation to Belarus.

EU4Climate is based on experience gained during previous (notably the Clima-East programme) and on-going projects, partnerships and initiatives, as well as on EU and UNDP expertise at both the regional and country levels in climate policy development and governance.

As a result of the project implementation low-emissions and climate resilience objectives will be integrated into development policies/plans in Belarus through improved and consolidated climate policies and legislative alignment as well as regional initiatives promoting economic diversification and green growth.

Background information: The EU4Climate Project is funded by the European Union (EU) and implemented by the United Nations Development Programme (UNDP). The project will run from 2019 to 2022 with a total budget of EUR 8.8 million and will help the six Eastern Partner countries to develop and implement forward-looking climate policies. It identifies key actions and results in line with the Paris Agreement, the "20 Deliverables for 2020”, and the key global policy goals set by the UN 2030 Agenda for Sustainable Development. The project will also translate into action priorities outlined in the Eastern Partnership Ministerial Declaration on Environment and Climate Change of October 2016.