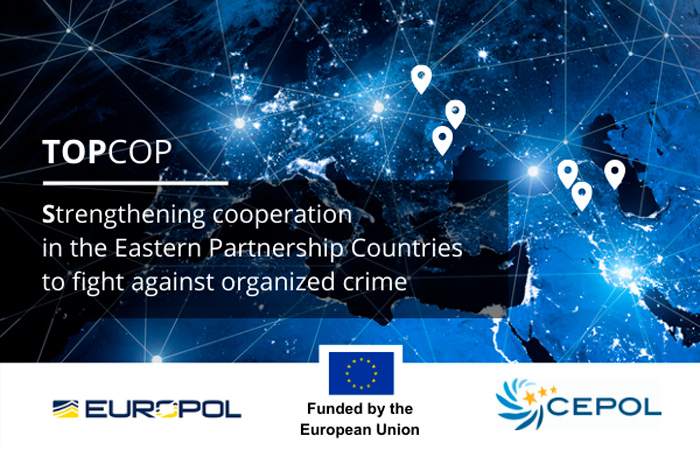 As highlighted in the Joint Communication of 28 March on the Eastern Partnership policy beyond 2020, organised crime poses a shared challenge for the European Union and the Eastern Partnership countries. To tackle this challenge, the newly launched project will foster deeper cooperation with EU Justice and Home Affairs agencies to fight organised crime, including economic crime, more effectively.

“We are proud to contribute to the fight against organised crime in our partner countries as well as in the EU. Organised crime networks operate across national borders and by intensifying cooperation, we can make sure crime does not pay. It is our common goal to create a safe and just society for all”, stated Lawrence Meredith, Director for Neighbourhood East at the European Commission.

“CEPOL’s unique role in creating professional training and networking opportunities for law enforcement professionals in the EU and its Neighbourhood is at the heart of CEPOL’s mission. We look forward to working very closely with the six partner countries in the region”, said CEPOL Executive Director Dr. h. c. Detlef Schröder.

Catherine De Bolle, Executive Director of Europol, highlighted that: “TOPCOP will improve operational effectiveness and foster more cooperation between the law enforcement authorities of the EU Member States and the Eastern Partnership Countries. Working together is crucial to connect the dots between international criminal networks in the EU and the neighbourhood region. Europol’s position at the centre of the European law enforcement architecture enables us to facilitate cooperation in the region”.

TOPCOP aims at improving operational effectiveness across the partner countries in the Eastern Partnership. It will also reinforce the nexus between law enforcement training and operations and provide an up-to-date situational picture of the threat organised crime poses to the region.

The project will create networks of capacity-building contact points to help close any gaps between law enforcement training and operational law enforcement efforts. It will also identify learning needs with a view to providing regional and targeted training based on evidence and commonalities.

The project will make full use of CEPOL’s and Europol’s long standing respective expertise in assessing and delivering on law enforcement training needs, and on analysing crime data with a view to support international law enforcement cooperation.

The European Union has committed EUR 6 million for this initiative, which will last for a 48 months period. The project will be carried out in close coordination with authorities of the six countries of the Eastern Partnership together with Delegations of the European Union in the region.

As part of a larger €10 million cooperation initiative, the EU provides financial support for two other components: the four-year project aimed at combating organised crime, and another one focused on criminal asset recovery (managed by the United Nations Interregional Crime and Justice Research Institute – UNICRI).