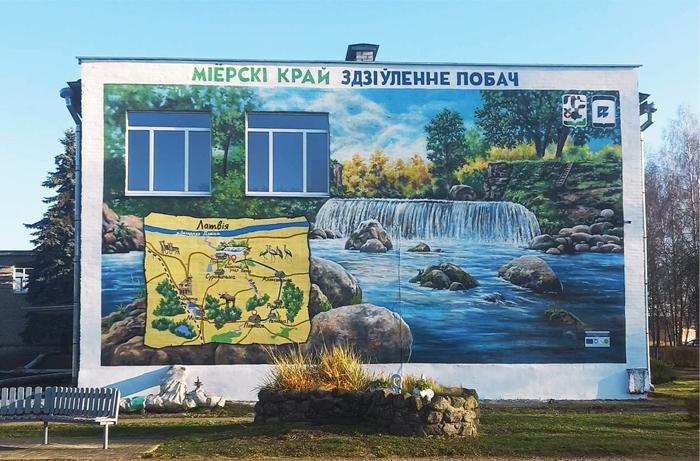 Niagara, Iguazu, Victoria… Paviaccie! There is a waterfall in Belarus, too. Both nature and man have toiled to make it. Before, one had to run a virtually detective-type investigation or have connections with the locals in order to find it. But now, the school building in the village of Paviaccie, Miory District, features a mural representing the famous Viata Falls and a map to help the tourists find it.

The mural was created by the street artist Yevgeny Sosiura under the project Together for Community and Nature: Strengthening of Development Process in Miory District through Partnership of Authorities and Civil Society, which is implemented by the Miory District Executive Committee, APB-Birdlife NGO and Latvian Rural Forum with financial support from the European Union. 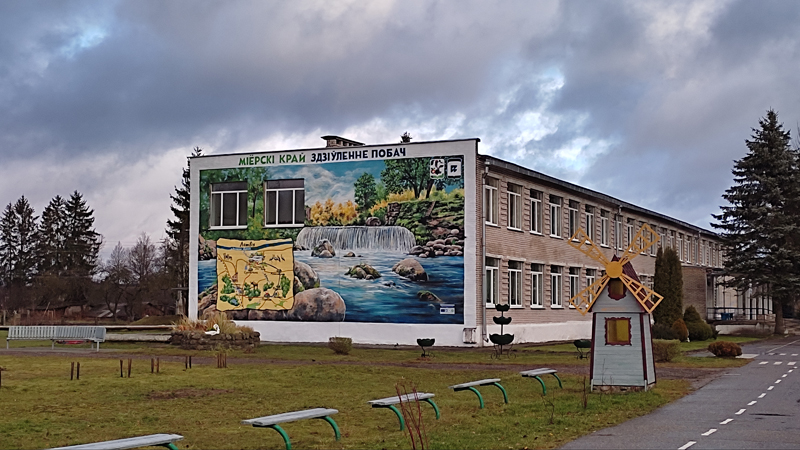 The picturesque waterfall on the Viata River has a fascinating history. At the beginning of the last century, a paper mill was built nearby. They added a gristmill to it at first, but there was not enough power for its operation, and they built a hydroelectric power plant on the river bank. The HPP supplied electricity both to the mill and the entire district. A two-meter stone wall was erected in the Viata riverbed in order to make the HPP operation more efficient. This gave rise to the waterfall, which is now attracting lots of tourists. As regards the power plant, it has been standing idle for a long time .

- The Viata Falls is near Paviaccie, but tourists sometimes have to wander around looking for it; therefore, I depicted both the waterfall and a map showing access to it, - said Yevgeny Sosiura. – I had a lot of fun working on it: I had help both from the weather and people who had a positive response to my work.

Come over to Paviaccie, make a selfie with the mural and go to see the waterfall! And, to make your trip even more interesting, visit Miory, Pierabroddzie and Dzisna, where some more cool murals have also been made owing to the project.

- All these murals differ from one another a great deal, but they are linked to the locations, where they had been painted, anyway - says the APB Tourism Development Specialist Siarhiej Rezaŭ. – A portrait of Jazep Drazdovič who went to the local school, was painted in Dzisna; all famous people of the district are depicted in Miory, which is the district capital. As concerns Paviaccie, the Viata Falls is the main local attraction, of course! The mural turned out very picturesque. Now, tourists can look at it and pick any of the several optional routes to admire the landmark and take pictures against its background.

Discover new places that surprise. The Miory land is rich in them.