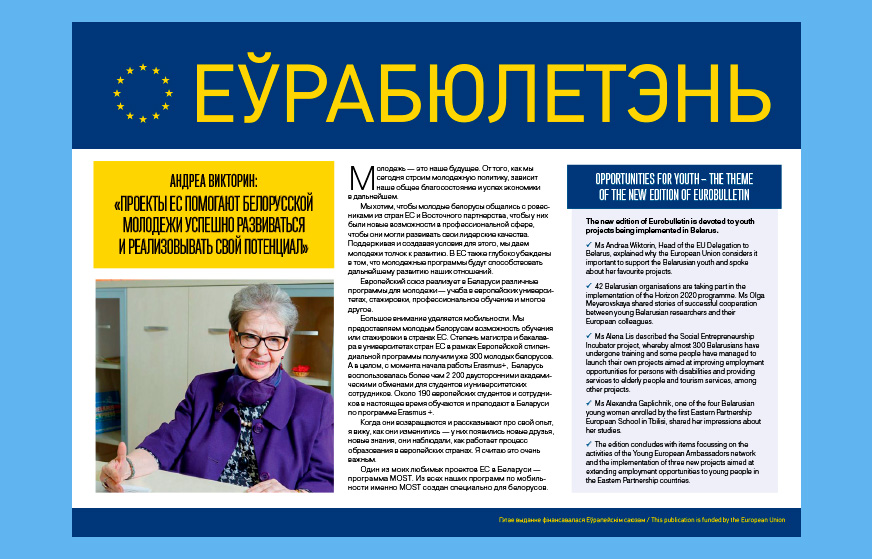 10.05.2019
The new edition of Eurobulletin is devoted to youth projects being implemented in Belarus.

Ms Andrea Wiktorin, Head of the EU Delegation to Belarus, explained why the European Union considers it important to support the Belarusian youth and spoke about her favourite projects.

42 Belarusian organisations are taking part in the implementation of the Horizon 2020 programme. Ms Olga Meyerovskaya shared stories of successful cooperation between young Belarusian researchers and their European colleagues.

Ms Alena Lis described the Social Entrepreneurship Incubator project, whereby almost 300 Belarusians have undergone training and some people have managed to launch their own projects aimed at improving employment opportunities for persons with disabilities and providing services to elderly people and tourism services, among other projects.

Ms Alexandra Gaplichnik, one of the four Belarusian young women enrolled by the first Eastern Partnership European School in Tbilisi, shared her impressions about her studies.

The edition concludes with items focussing on the activities of the Young European Ambassadors network and the implementation of three new projects aimed at extending employment opportunities to young people in the Eastern Partnership countries.