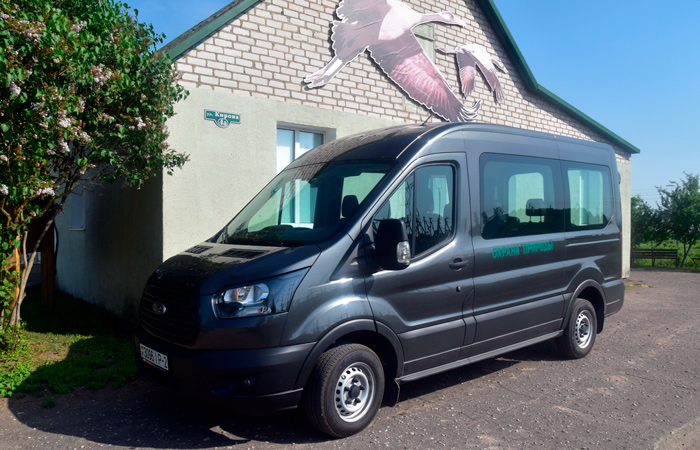 15.06.2020
In June this year, Jeĺnia State Nature Protection Institution received a van for carrying out its environmental activities; its procurement became possible owing to the implementation of the project “Together for Community and Nature: Miory District”.

Jeĺnia State Nature Protection Institution exercises administration of Jeĺnia (25,301 ha) and the Moch Swamp (4,602.03 ha) National Reserves. In 2018, the district executive committee placed 20 more natural monuments and local nature reserves under the control of Jeĺnia SNPI; as a result, its protected area has more than doubled!

The Jeĺnia Swamp is the greatest in Belarus and one of the largest systems of lakes and bogs in Europe. It is valued for being a relic of the faraway ice age and the oldest natural site in Belarus. The international significance of the Jeĺnia Swamp is a combination of, first of all, its importance as a stopover site of migratory wader species, and the place of preservation of major wetland plant communities and rare plant species.

In order to minimize the human impact on the reserves and natural monuments, Jeĺnia SNPI carries out environmental activities that provide for preserving the established mode of site protection and utilization; making research arrangements; conducting environmental monitoring and tourist activities; and enhancing public environmental awareness.

–We are deeply thankful to the project and the European Union for the procured vehicle. I am positive that it will help making the protected area management more effective. In future, we plan to use the vehicle for transporting tourists, –noted Ivan Barok, Director of Jeĺnia SNPI.

International technical assistance project “Together for Community and Nature: Strengthening the Development Process in Miory District in Partnership of Authorities and Civil Society”is financed by the European Union and implemented by Miory District Executive Committee in partnership with APB-Birdlife Belarus and Latvian Rural Forum.