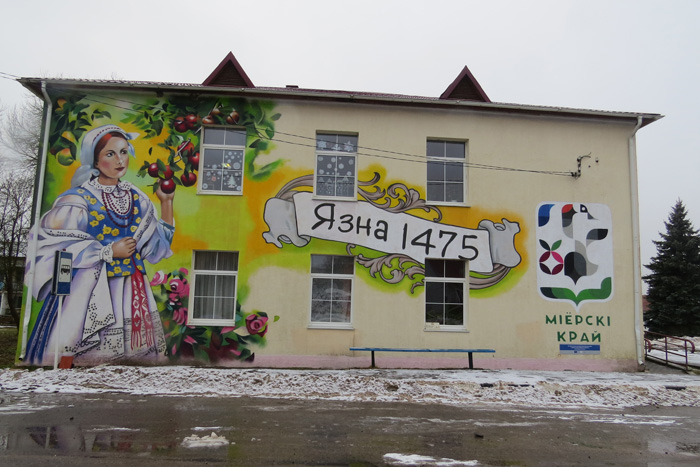 A mural dedicated to the local landmarks has appeared in the ancient town of Jazna nestled between two picturesque lakes near the Jeĺnia swamp in Miory district in northern Belarus. Come take a selfie against the background of the mural, take a look at the old brick church and enjoy the natural scenery!

The mural was created by artist Siarhiej Klimkovič according to Dzianis Chodas’s sketch under the project “Together for Community and Nature: Strengthening of Development Process in Miory District by Partnership of Authorities and Civil Society”, which is implemented by the Miory District Executive Committee, APB-Birdlife NGO (Belarus), Latvian Rural Forum (Riga, Latvia) with financial support from the European Union.

“I developed the sketch with due regard to the wishes of local residents”, said Dzianis Chodas. “They wanted me to reflect the local flavour, culture and history, to make them noticeable for visitors. Everyone was very enthusiastic about the mural concept, and there were a lot of suggestions for the sketch. We opted for the ideas that won the vote.”

They also selected an appropriate location for the mural: the local House of Culture at 2 Liasnaja Street.

“The Jazna mural is the last work of the kind under the Together for Community and Nature project”, said Siarhiej Rezaŭ, APB Tourism Development Specialist. As in all previous murals, its subject is related to the location where it is painted. Jazna now has a beautiful girl dressed in the Dzisna costume, the local festive dress that was worn in the northern part of Belarus in the 19th century. The girl strolls among apple trees, which is no coincidence – the Apple Feast of the Saviour is held in Jazna every year. The word “Jazna” is inscribed next to the date of the first historical mentioning of the town. And, of course, one cannot fail to notice the Miory region’s emblem, which was also developed under the project. Thus, the mural comprises both the past and present-day elements.

The local residents were curious to see the artist’s work observing how facial features and fragments of the mural storyline emerged from the initial marking, and the image began to come into sight.

“The local residents were satisfied, they even joked suggesting that the girl looked like someone's wife”, said artist Sergei Klimkovič. “I had a great experience of cooperation, I was very well received, and the place as such is fascinating, I recommend everyone to come visit it.”

Be sure to take this tip: visit the hospitable Jazna and expand your itinerary with trips to other the locations of the conceptual murals created under the project: Miory, Pierabroddzie, Dzisna and Paviaccie. Miory land stocks quite a few surprises – start the journey and see them for yourself!