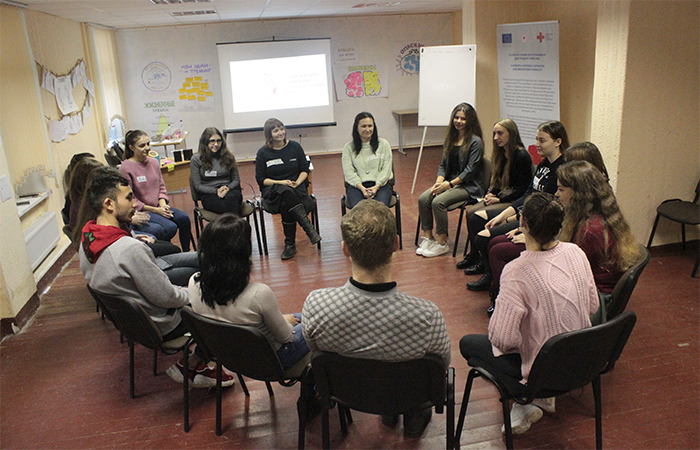 16.10.2019
On 9-11 October, a training course on life skills and employment was held in Ždanovičy near Minsk as part of the EU4Youth programme. It was attended by socially vulnerable young people from remote regions of Belarus aged 18 to 31 years.

The training was conducted by experienced trainers Olga Shmigelskaya and Yulia Yakubovich from the ‘League of Youth Voluntary Service’ NGO.

During the three days of training, the young men and women studied basic tools for getting a job and interaction with society. They learned to set goals and identify ways to achieve them, find ways of effective communication - both verbal and non-verbal - tried themselves at leadership, established effective interaction with other people, identified causes of conflicts, ways to solve them, opportunities for conflict-free behaviour and many other important aspects of life.
One of the participants was Ilyas Yalkapov from Turkmenistan, who is studying enterprise management at Mahilioŭ State University.

“In Turkmenistan, I did not graduate from any educational institutions - I just learned all the skills by trial and error,” says Ilyas. “Some of the topics at the training were a real discovery. And some I knew before the training, but I did not have a clear understanding of how to work with them. For example, a block about setting goals and describing how to achieve them was exactly what I needed! I set a lot of goals, but I don't always know how to divide them into small tasks, which I could solve step by step.”

Alesya Sechko, a trainee from Loev says she learned a lot about how to interact with others: “I tend do not mince my words when I have to express my position. More often than not, people do not like this approach. At the Life Skills training, the trainers offered various techniques for self-representation, presentation of one’s position and interaction with people at the verbal and non-verbal level. I think it will be easier for me to build relationships with people by studying these techniques," she said.

A similar training was conducted on 15-18 September for another group of participants from Homieĺ and Mahilioŭ regions.

The trainings are conducted in the framework of the project ‘EU4Youth: Fostering potential for greater employability’, implemented by the Belarus Red Cross and funded by the European Union, says project coordinator Irina Strekha.

Over three years, the project will conduct a total of 10 trainings on development of entrepreneurial ideas, 12 trainings on life skills, and 6 trainings on effective job search.

The project helps socially vulnerable young people aged 18 and 31 to acquire useful skills and increase their chances of successful employment or starting a business. Similar activities are also impemented in Armenia and Georgia.

The project is funded by the European Union within the framework of the EU Youth Initiative.